I want to report on my attempts, so that people who have the same purpose know what to try and what has already been tried.

I have a french Yaris with a W58824 head unit (radio, CD player with MP3, no USB host, no aux input). This device is special in that unlike the american Yaris many people here report about, it doesn’t have an analog AUX input, nor an AUX button on front.

I have, naturally, attempted to plug a jack on the D74 connector, using the pinout described in the (US) Yaris repair manuals available on the Internet http://microimageonline.com/forums/showthread.php?4232-YARIS-REPAIR-TECH-TSB-FILES. I confirm it doesn’t work: there is no way to tell the head unit to switch to the AUX input (no AUX button, none of the other buttons work to that effect either). I believe the pins are actually reused for other things on the W58824 - and others are used for the steering wheel commands. 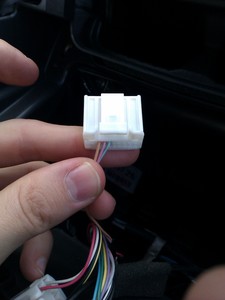 So what are the remaining options?

Emulating a CD changer is harder than it seems. This unit does have a CD changer connector, but it uses AVC-LAN. You need some electronics to talk to the unit over the AVC-LAN bus, to make it think that there is a CD changer. Refer to http://www.softservice.com.pl/corolla/avc/avclan.php for details. Although my skills would enable me to do that, I was looking for a simpler and less expensive solution. An AUX input isn’t that great as compared to just plugging a USB thumb drive with MP3s, so that isn’t worth a lot of time nor money to me.

2 and 3 require dissassembling the unit, and I thought I would report on that - and my subsequent failures at both options - so that others can take it from there.

Removing the device from the car

This is documented in various places. Quick recap: 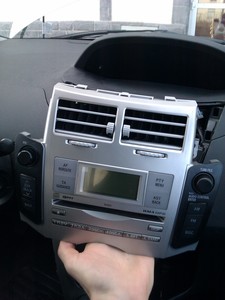 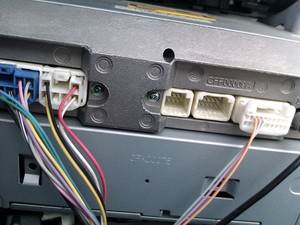 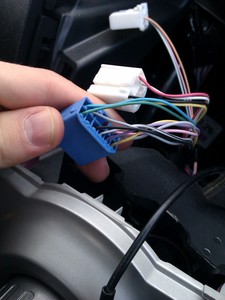 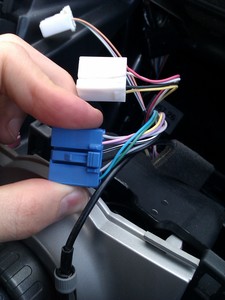 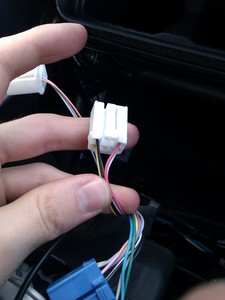 To disassemble the device, after you’ve taken it out of the car, you need to: 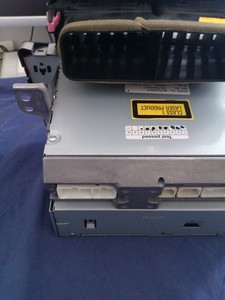 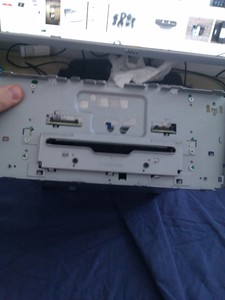 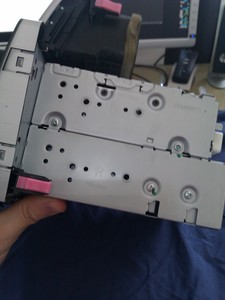 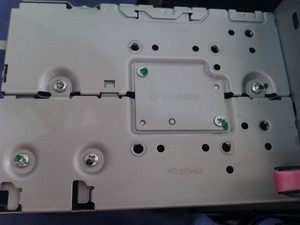 Unfortunately, it seems that most of the chips present on both boards are either internal Panasonic components, or very confidential designs, as I was able to find practically no datasheet on the Internet! That’s where the aforementioned repair manual helps you - the chips are different, but some of the names, and the general architecture, are identical. One difference I am aware of is that the CQ-TS0570LC (Panasonic’s name for the W58824 unit we’re looking at) has MP3-data-CD ability, which the CQ-TS7471 doesn’t have. I have not been able to find out which chip was responsible for decoding the MP3. I would expect the main DSP on the mainboard to take care of it, but the 14-pin interface between the CD reader and the motherboard hasn’t changed from the CQ-TS0570LC. Perhaps the serial data pins are used to transfer the mp3 contents, I am not sure. I hope the interface remains analog, because if it isn’t that will destroy option 2 (inject AUX at CD reader output). 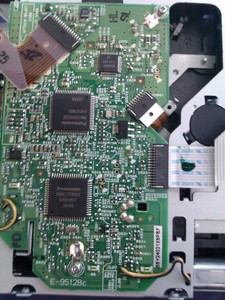 The CD reader connector has fourteen pins, of which three pins are interesting - Left, AGND, Right. Identify them - refer to the repair manual linked above. On the mainboard - sorry I don’t have pictures - they are the three top pins of the connector, next to each other. On the other side of the connector is a +8V power supply, with a trace which is physically a little further away, and a capacitor next to it. You don’t want to get the connections wrong. :) So you can hook up your jack connector there, that’s what I did. There are tiny vias next to all of those pins, if you have wire that is thin enough (I used single strands of copper wire). Good luck soldering them. I destroyed part of a trace, without any impact on functionality. Still, you have to be confident in your abilities because this is tiny, and I actually wasted more time on that aspect than I thought possible. The problem I had was that it didn’t work. When I plugged the jack connector (I used a male cable instead of the more common female sockets people use for AUX inputs) into the MP3 player, the sound from the currently playing CD was completely muted (overpowered?), but I didn’t hear anything from the MP3 player. Note that I neglected to put small capacitors in series with both channels on the jack connector. This is unlikely to explain the issue. I was quite tired by the time I tested, and don’t have an oscilloscope available, so I couldn’t easily check if I made a simple mistake or if the CD reader output cannot easy be highjacked.

Note that other people have succeeded in this approach (on another car) - link updated in 2016 to an archive link as the website seems no longer to be up. 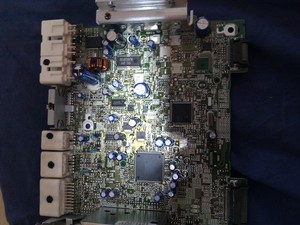 The amplifier is pretty easy to identify on the mainboard. If you can’t spot it within 15 seconds, please reassemble everything and gain more experience before you mod a car radio. Mistakes are expensive here (I ran across a Panasonic repair prices document, this is pretty scary stuff.)

The center pins have four easy to notice tiny traces, with a slightly bigger one in the middle. Those are the FrontLeft/FrontRight/RearLeft/RearRight and **GND traces. You can identify them easily since the other pins of the amplifier are outputs and consequently have larger amounts of copper to them (wider traces). You can attempt to plug your jack connector there. The problem I had was that it didn’t work either. Again, the signal would be muted (overpowered?), but it’s not like I heard anything from my MP3 player either. Do note that I still didn’t have capacitors in place, and also as I realized later this unit uses a small preamplifier. For all I know the signals levels were completely wrong, and should have been injected before the preamplified instead.

I’m giving up on 2) and 3). The connections are hard to make, and my attempts didn’t work. An AUX connector is just not worth more than the 7-and-a-half hours I spent on this small project.

A second try on the CD reader might be interesting. Hooking up to the preamplifier sounds like the best strategy, however. You may want to try injecting the signal at the radio’s output, but I’m not sure it would make any difference.

I need to learn more about the signal levels at the output of a CD reader and on a typical 3.5mm jack connector.